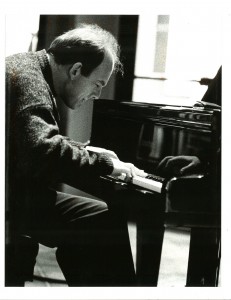 Pianist and composer David Roitstein is the Jazz Program Director at California Institute of the Arts.  He received his degrees from the University of Miami.  As a young musician in the culturally diverse Florida city, Roitstein performed and recorded with a wide variety of artists, from Cuban wedding bands to emerging jazz talents such as Jaco Pastorius, Pat Metheny, and Carmen Lundy.  He went on to work with many legendary singers including Mel Torme, Carmen McRae, and Frank Sinatra.

David moved to Los Angeles in 1981, and, together with the world-renowned bassist Charlie Haden, created the innovative and award-winning CalArts Jazz Program in 1983.  In 1990, with the support of Capitol Records and EMI Music, he established the annual CalArts Jazz CD project.  Since then, he has produced thirty CDs at Capitol Studios, documenting original compositions by CalArts students.  (http://jazzarchive.calarts.edu)

While teaching and building the program, Roitstein continued to perform in clubs, concerts and tours, and as a studio musician for film, television and records.  Recent recordings include Conversations (Jazz Compass 1024), a duo CD with guitarist Larry Koonse (Best Albums of 2015 – Downbeat magazine), and Americana (Jazz Compass 1001) with Larry Koonse, Scott Colley, and Kendall Kay.  As a composer, he has produced two recordings of new works, featuring chamber music and jazz compositions.  (https://davidroitstein.com)

In October 2007, Roitstein was designated the Mel Powell Chair at CalArts, one of four honorary endowed faculty chairs in the School of Music.